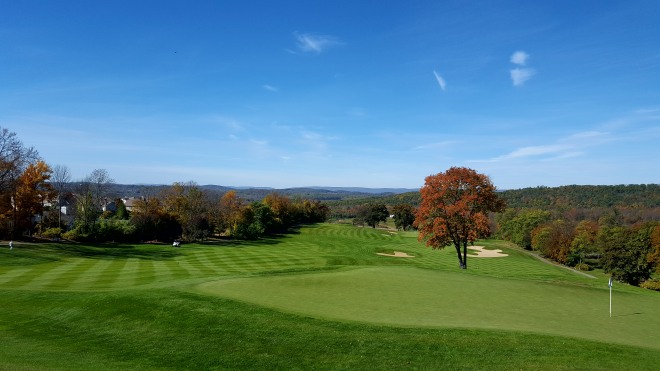 The first Crystal Springs course off my list was half of a golfing-skiing adventure at the nine-hole Cascades layout, with the skiing taking place at Mountain Creek. My day at Wild Turkey was strictly a golfing affair.

An early tee time in late October in Sussex County meant we started our round in frigid temperatures and finished it in the 60s. Expecting Wild Turkey to be something of a tougher course, I told my golf buddy that we should just play “smart golf” on the day. It turned out to be one of those rare times when I had a plan and executed well.

I ended up shooting +12 (+6, +6) on the par 71, with nothing worse than my double-bogey on the par-5 17th, and that was primarily due to over-drawing my drive and not clearing the water/lateral hazard. Having hit only six fairways and six greens in regulation, the keys to my scoring well – for me – were definitely putting, putting, and putting.

Even though 33 putts is not a great number in the grand golf scheme of things, it is just below my average. That was remarkable for me, given that Wild Turkey has some relatively fast greens for a public course, and that I had putt as many as 41 times (!!!) just two rounds earlier at Beaver Brook CC.

Here are a few interesting notes on my putting for the round.

Again, if my putting wasn’t what it was, my +12 could’ve easily been +16 to +18. I’ve had plenty of those rounds this season. I was happy to add another great first-time score to my journey around the New Jersey publics, especially on a course as stunning as Wild Turkey.